The Train of Hope was ceremonially seen-off to the city of Krasnoyarsk on October 06, 2009. The participants in the action met at the Belorussky Railway Station to proceed to the Sheremetyevo Airport following the end of the official part of the ceremony.

The Train of Hope is a unique action of the social project called the Children’s Issue of the Radio of Russia state radio company and the Spread Your Wings! charity fund, which is carried out jointly with the OJSC Aeroflot – Russian Airlines. A new partner, LLC Aeroexpress, has joined the project this year. The main goal of the trip is to draw the public and media attention to the problems of orphanage and arrange a meeting o potential substitute families with inmates of children's homes and orphanages located in the Krasnoyarsk Region.

This is the 10th anniversary trip to Krasnoyarsk for the Children’s Issue project and the 5th one for the Spread Your Wings! charity fund. The social Children’s Issue allows 150 children to find families in Russia annually. Since 2005, the participants in the Train of Hope action have been to Oryol, Kostroma, Ryazan, Ivanovo, Pskov, Volgograd, Vologda, Irkutsk, and Novosibirsk.

The ceremonial seeing-off of the Train of Hope to Krasnoyarsk was attended by representatives of the action managers and honorable guests of the event:

Vladimir Yakunin, OJSC Russian Railways president, chairman of the board of trustees of the Spread Your Wings! charity fund,

Anna  Abbasova, president of the Spread Your Wings! charity fund,

All co-managers of the event talked about the outstanding effect of the Train of Hope trips, which have resulted in over 500 children finding a family so far! It is of vital importance that more and more individuals and organizations are supporting the project: the first to join the Children’s Issue was the Spread Your Wings! charity fund and OJSC RZD, then OJSC Aeroflot – Russian Airlines followed to open remote cities to the participants in the action.

New friends joined the project this time – LLC Aeroexpress, who made the trip to the airport more available for the future parents to travel to Krasnoyarsk. Vladimir Yakunin, OJSC RZD president, and Lev Koshlyakov, a representative of Aeroflot, and Maksim Liksutov, CEO of Aeroexpress LLC, - all voiced the importance of taking part in the important action called The Train of Hope. Anna Abbasova, president of the Spread Your Wings! charity fund, spoke of the results of previous actions and plans for the future. 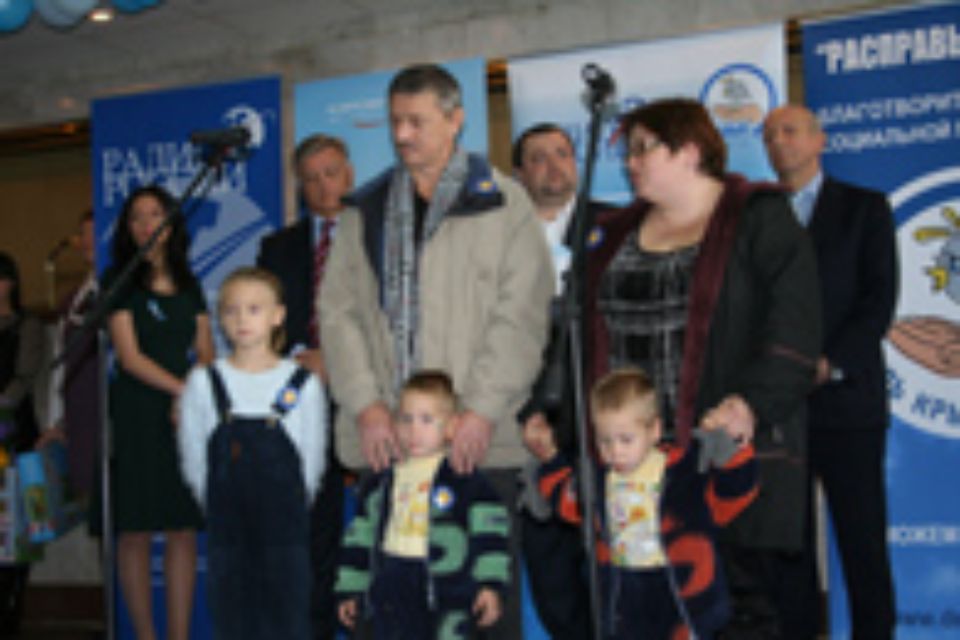 Parents and children, who participated in previous programmes, became guests of the ceremony. Two families, who took part in previous actions, spoke at the ceremonial meeting. The first family had among its members three adopted children: a girl named Sasha and two twins, the common favorites, named Sasha and Alyosha. The second pair became adoptive parents just recently, in April 2009, after the previous journey on the Train of Hope to Novosibirsk, where they affiliated a baby girl attracting universal attention.

Vladimir Yakunin, OJSC RZD president, and Anna Abbasova, president of the Spread Your Wings! charity fund, presented all children with wonderful toys.  However, before that they had received the main gift from the Train of Hope, that is the ability to find a real family.

After the official part was over, the participants proceeded to the Sheremetyevo Airport on a specially decorated passenger coach of an Aeroexpress train. After the would-be parents arrived at the airport they attended classes of the Foster Parents School arranged in the Aeroexpress terminal of Sheremetyevo.

So off took the plane to the far city of Krasnoyarsk carrying the excited parents willing to find “their” child. We heartily wish them good luck and hope that many of them come home as official mothers and fathers!