The first double deck train – out of the twenty five ordered by the railway operator Aeroexpress from Swiss rolling stock manufacturer Stadler Rail Group – arrived at the capital of Russia and was officially presented to Moscow city officials and the media. 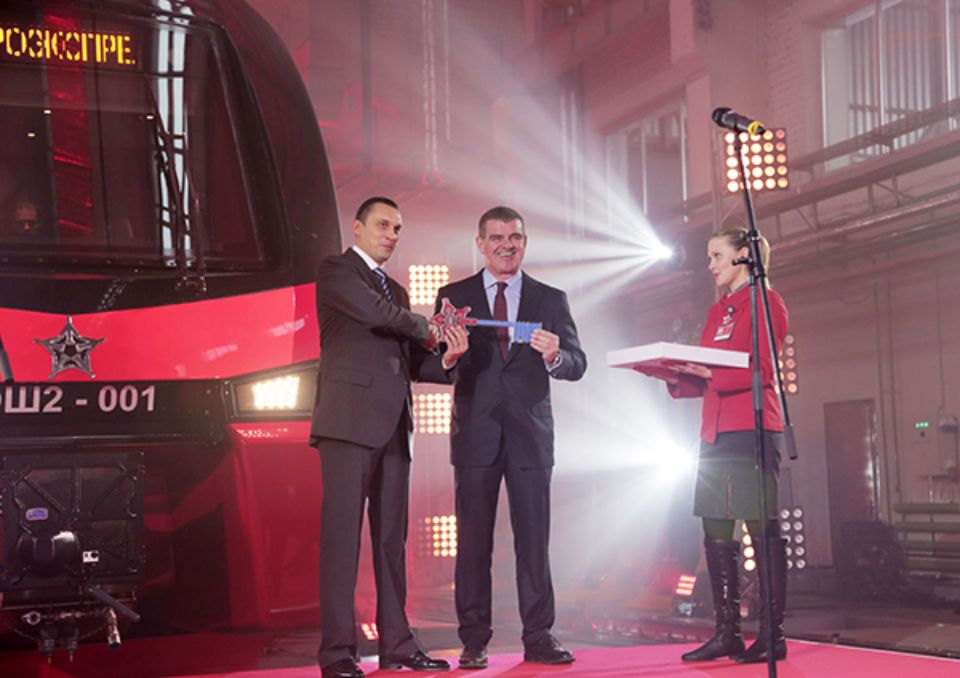 The first six-car double deck train arrived from Stadler’s recently built factory located in the outskirts of Minsk in Belarus, to Moscow Depot of Aeroexpress, where its official presentation took place. Among the guests of honour there where the Mayor of Moscow city Sergey Sobyanin, Deputy Mayor of Moscow for Transport and Traffic Infrastructure Development Maxim Liksutov, Ambassador of Switzerland to the Russian Federation Pierre Helg and Ambassador of Belarus Republic to the Russian Federation Igor Petrishenko. 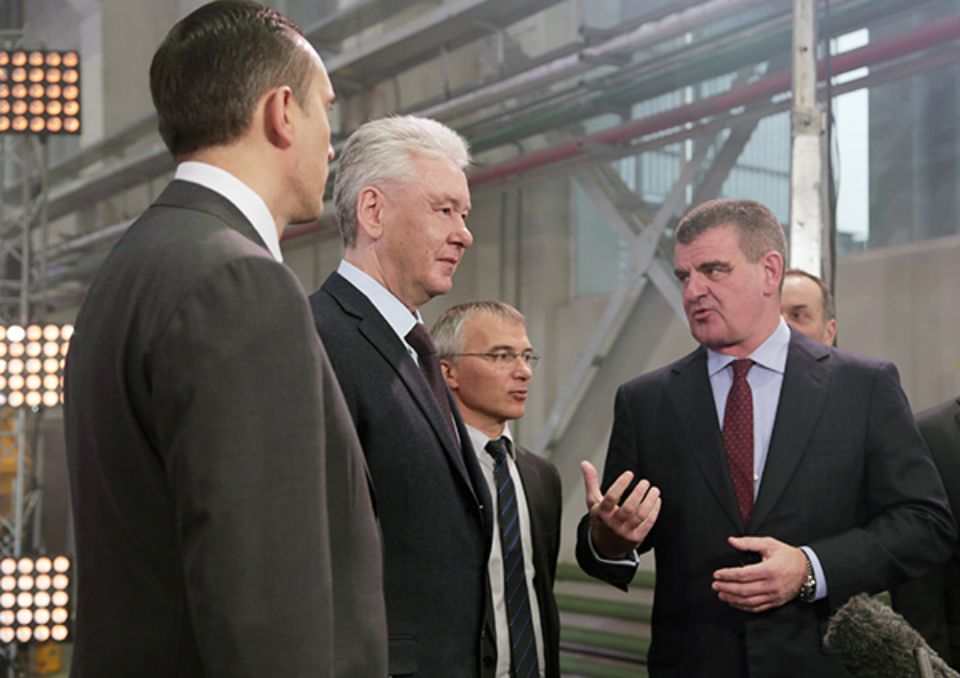 Sergey Sobyanin, Mayor of Moscow, after having the tour over the train, has noted social significance of this project for the city: “Every year Aeroexpress passenger traffic flow grows on 20% on the average. Many runs are even now overcrowded. Therefore it is time to increase the capacity of trains and frequency of runs from Moscow to the airports and back. First of these tasks is now already solved by purchasing of new double-decked trains which will be able to carry approximately 35-50% passengers more in comparison with one deck EMUs. Second task will require some years more as it is necessary to build additional railway tracks. New double-deckers will solve the problem with transportations growing needs of passengers at least till 2018. Thus they guarantee passengers a very high level of comfort.” 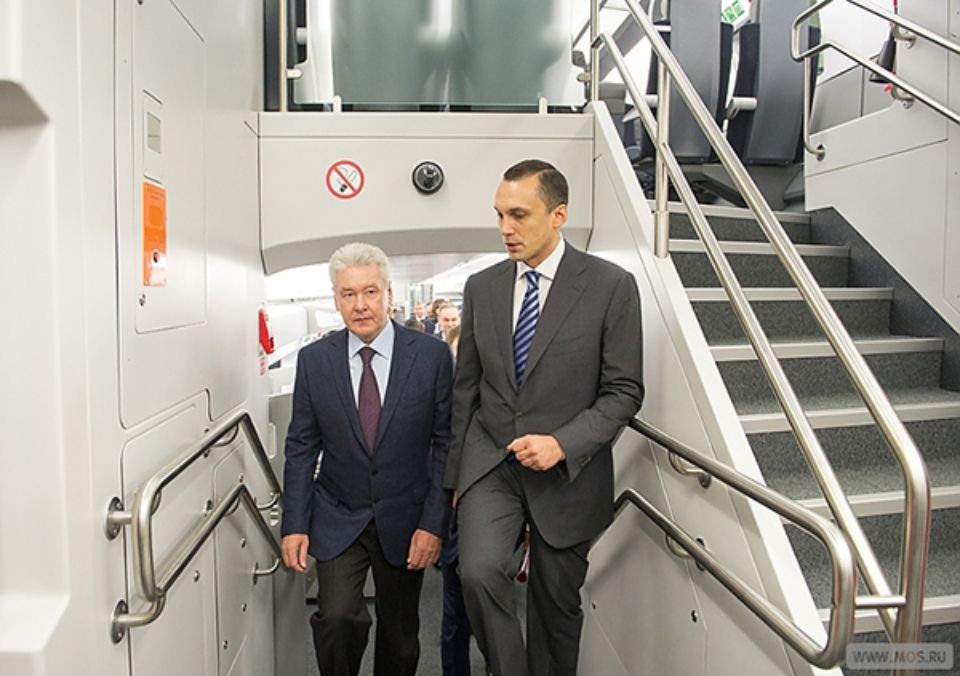 New double deck trains customized for Russian conditions were given an imposing name ‘Eurasia’, being yet another evidence of this project particular status. “Today’s event is the milestone for the whole public transport of Russia – the first double deck train at the European level has arrived into Russia. The project discussions and planning took some time, it is being implemented in record-breaking time, and now we are welcoming our first Eurasia Aeroexpress train. This name perfectly characterizes the significance of Aeroexpress company efforts to ensure rapid and reliable connection between the capital and its air harbors serving thousands of flights heading all over the world. It is not long before our passengers will enjoy European comfort and Russian scale merged in powerful double-deck trains.” is sharing Alexey Krivoruchko, Director General of Aeroexpress. As a part of the train-welcoming ceremony, Peter Spuhler, the Owner and Group CEO of Stadler Rail Group, has handed over a symbolic key of the train to Alexey Krivoruchko, Director General of Aeroexpress, and underlined the significance of the event for the company. “It is only a year and a half since the delivery contract with Aeroexpress was signed, and now we can celebrate the arrival of the first unit. We have said many times that we are very proud of the particular product we have just produced. Of course we are, as we are proud of every single product rolling out of our factories. But this time we can really say that we developed something special, something unique. This vehicle is the largest passenger train we have every produced, and it is fully tailored for Russian conditions. It is one of the most significant milestones in the history if Stadler, and we hope that the execution of this prestigious project will be a successful introduction of Stadler to the railway market of Russia” – Mr. Spuhler stated. The new double-deck train can be considered to be a unique one due to its details and absolutely difference from the nowadays Aeroexpress rolling stock. All conditions for ensuring comfortable free transportation of physically disabled people are provided; there is a special mechanical elevator and a large toilet. While designing the special attention was paid to needs of the passengers traveling with small children, toilet rooms are equipped with changing tables with the disinfecting lamps. The trains` size allowed increasing a place for baggage, having provided luggage places under seats, the top shelves along the whole carbody, and shelves at the beginning, the middle and the end of the carbody, thus the lane between sitting rows remains wide. Such service as the bar with coffee-machine was added in the business-class. Every carbody is equipped with video system of several monitors, electricity points of 220 V and all armchairs can be transformed. The new double-deckers are 3,400 millimetres wide with a height of 5,240 millimetres The trains are designed to cope with the specific Russian climate, which can range from –50 degrees Celsius to +40 degrees Celsius and in this respect are based on the FLIRT vehicles delivered to Finland, Norway, Estonia and Belarus. The trains will have a speed of 160 km/h and have comfortable, bright interiors in two classes (business and economy). Stadler Rail Group has become a strategic partner of Aeroexpress after participating and winning an international tender in Moscow in 2013. The parties signed contract on May 28 last year. The contract includes the supply of 25 double-decker trains. The first 4 units are produced by the factory of Stadler in Altenrhein, Switzerland, while the remaining 21 are being made in the latest investment of Stadler in Minsk, Belarus. The contract for 118 carbodies is worth in total EUR 685 million (including VAT including 54 carbodies optionally). Aeroexpress purchases trains at its own expense, therewith investing into the development of railway passenger transport. The next stage will include dynamic testing and different strict authority examinations, including tests for winter operation on the test ring in Scherbinka, which are to result in obtaining the homologation. According to the contract, commercial operation of the first train is to commence in June 2015, while the last – 25th train of the delivery – is expected to enter service in June 2016.

Stadler Rail Group, system supplier of customer-specific solutions for rail vehicle construction, has locations in Switzerland (Altenrhein, Bussnang, Winterthur and Biel), in Germany (Berlin-Pankow, Berlin-Hohenschönhausen, Berlin-Reinickendorf and Velten), in Poland, Hungary, the Czech Republic, Italy, Austria, Belarus, Algeria and in the USA. The Group has a workforce of around 6,000 people, of which 3,000 are based in Switzerland. The best-known vehicle series from Stadler Rail Group are the articulated multiple-unit train GTW (571 trains sold), the Regio-Shuttle RS1 (497 trains sold), the FLIRT (1018 trains sold) and the double-decker multiple-unit train KISS (190 trains sold) in the railway segment, and the Variobahn (353 vehicles sold) and the Tango (147 vehicles sold) in the tram segment. The Metro is another addition for the commuter rail market (2 + 34 vehicles sold). Furthermore, Stadler Rail manufactures metre-gauge trains, passenger carriages and locomotives and is the world’s leading manufacturer of rack-and-pinion rail vehicles.