Dmitry Medvedev Verifies the Readiness of Aeroexpress before Launch in Vladivostok

On July 3, 2012, Russian Prime Minister Dmitry Medvedev made a working visit to Vladivostok in order to check on the level of readiness of infrastructural objects for the upcoming APEC summit in 2012. These include the new Knevichi Airport and the Aeroexpress railway terminal at this airport. During this visit, the Prime Minister was accompanied by First Deputy Prime Minister Igor Shuvalov, Primorsky Krai Governor Vladimir Miklushevsky, RZD (Russian Railways) President Vladimir Yakunin, Aeroexpress CEO Alexey Krivoruchko, and other officials. 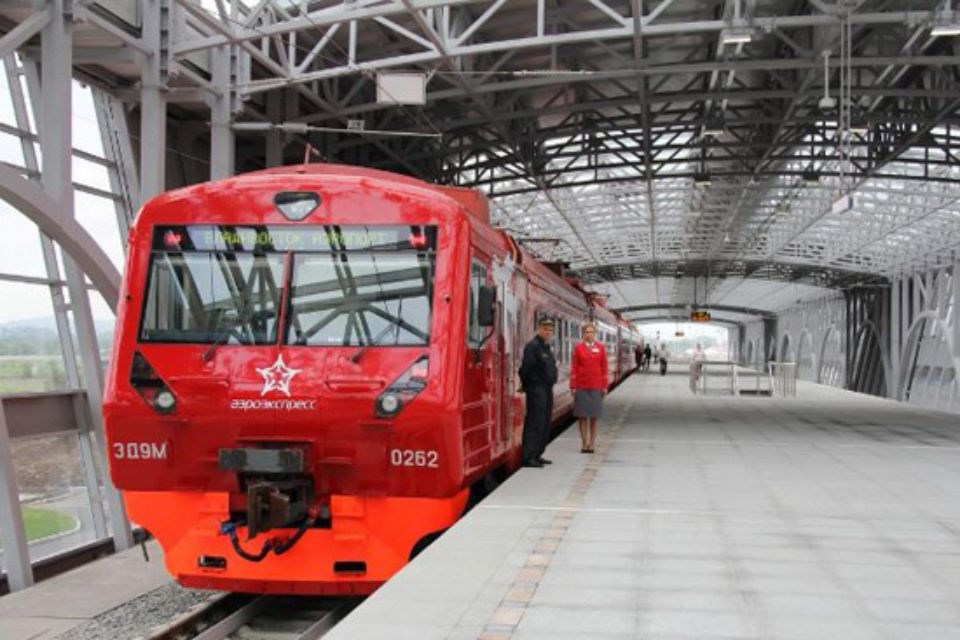 The project for intermodal passenger transport along the route between the Knevichi Airport and Vladivostok is part of the sub-programme 'Development of the City of Vladivostok as a Centre for International Cooperation in the Asia-Pacific Region for 2008-2012' within the Federal Target Programme 'Economic and Social Development of the Far East and Transbaikalia for the Period until 2013”. In order to assess the quality of Aeroexpress trains, the Prime Minister took the opportunity to travel on one of the new trains from Vladivostok to the airport. “This is a good train; it is very convenient. Now it takes less than one hour to get from Vladivostok to the airport,” stated Prime Minister Medvedev.

According to the head of Russian Railways, Vladimir Yakunin, the project involved the upgrading of existing infrastructure, refurbishing the platforms and the overhead (catenary) system, laying an electrified track extending more than 4 km in length. Terminal facilities for airline passengers were also constructed, as well as a two-level interchange overpass over the highway, and railway platforms were repaired.

Aeroexpress trains will be integrated into the inner city transport system and will run from Vladivostok’s central rail terminal to the Knevichi Airport with intermediate stops at Vtoraya Rechka, Ugolnaya, and the Aeroport. The time interval for trips is 2 hours (as of September 1, 2012, it will only be one hour). The total travel time is 55 minutes (as of September 1, 2012, it will be 48 minutes). The passenger rolling stock is ED9M trains produced by the Demikhovsky Engineering Plant. The trains consist of six cars designed with 475 seats. There is one business-class car, two standard cars, and three suburban carriages. All cars feature a climate-control system, video camera surveillance, and a public address system. Aeroexpress CEO Alexey Krivoruchko also informed the Prime Minister that, in addition to offering standard services on the trains, passengers would also benefit from access to wireless Internet.

The terminals at the Vladivostok central rail terminal and the Knevichi Airport were equipped at the company’s own expense. This involved the installation of ticket offices, ticket vending machines, and turnstile lines. Conductors will work aboard all trains. When required, passengers with disabilities are provided with the free Personal Assistant service. Electric railcars are equipped with folding ramps to ensure wheelchair entry and the availability of special places. Ticket offices at the company’s terminals are equipped with intercoms with an adjustable volume level for people who are hearing impaired.

Vladivostok will be the third city in Russia to have an organised intermodal transport system implemented. In 2008, Aeroexpress first appeared in Moscow, running from the centre of the capital to all three major Moscow airports: Sheremetyevo, Domodedovo, and Vnukovo. On February 15 of this year, Aeroexpress trains were also introduced to offer transport in the future Olympic capital – Sochi.